Fed Board nominations in the works

Officially, Chair Jerome Powell’s first four-year term is done. At the moment, he is termed as chair pro tempore effective February 5, a designation which has been used in the past to cover the gap between the end of one term as chair and swearing in as another. In the meantime, Powell performs all the duties he has as chair. He is still chair of the FOMC as he was voted in at the January 25-26 meeting, and he is still a governor on the Fed Board for his term which runs through January 31, 2028. It is expected that the Senate Banking Committee will give its recommendation to Powell – although perhaps not unanimously as Senator Elizabeth Warren has previously expressed her disapproval. It is also probable the full Senate vote will pass by a comfortable margin.

Governor Lael Brainard did not get quite the same warm welcome as did Powell in her confirmation hearing, but on the whole the tone was friendly and there were sentiments expressed of intentions to send her nomination forward to the Senate. Brainard is also likely to get the Committee’s recommendation and pass a vote by the Senate.

A Senate vote on Powell Brainard could be scheduled fairly quickly and should be out of the way in short order. 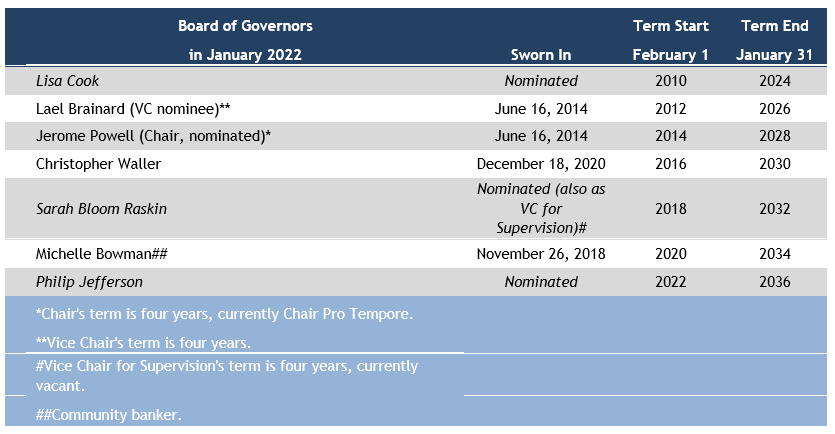 More problematic are the nominations of Sarah Bloom Raskin as governor and vice chair for supervision, and Lisa Cook and Philip Jefferson as governors. There was a clear political agenda among Republicans that the theme would be the Fed was endangering its independence by exceeding its mandate and becoming active in areas like social equality and climate change via credit allocation.

Jefferson faced the least hostility in his confirmation hearing and should get recommended and be able to pass in the Senate vote.

However, Raskin was grilled repeatedly on her prior writing that suggested the energy and gas industry should not get subsidized credit due to the risks of climate change and encouraging further investment in and use of fossil fuels. Her answers on the topic sounded evasive and her questioners were clearly not satisfied, although it seems that no response could change their minds. Cook was questioned on her qualifications and portrayed as a social activist.

Any recommendation for these latter two is going to be split along party lines and face a tough vote in the Senate. It is possible that Democrats are going to delay any vote on Raskin and Cook until it is clear that it will not be a political defeat for President Biden in failing to get his nominees approved. This has happened before when Marvin Goodfriend, back in 2018, had a terrible confirmation hearing. Although his nomination was approved along party lines, the Republicans never brought about a vote because of a worrisome lack of support and the political baggage associated with it.