Outlook for US first-quarter GDP improving but subdued

The GDP Nowcasts from the St. Louis and Atlanta Fed’s are starting to look more similar and hinting that as the first quarter 2022 progresses, the economic data are looking better. Still, the rate of expected annualized growth is modest.

The St. Louis Fed’s Real GDP Nowcast had a small downward revision to 1.46 percent as of March 18 from 1.52 percent in the prior week, but the change is negligible. The Atlanta Fed’s Staff Nowcast was revised substantially higher to 1.30 percent as of March 17 from the 0.50 percent last week.

An average of the two puts the forecast at up 1.4 percent for first quarter GDP, a steady improvement over the past two weeks. While this isn’t exactly rip-roaring expansion and looks wan compared to growth in the past six quarters, it isn’t all that far below the FOMC’s longer-run expectations of 1.8 percent. In fact, a modest pace of expansion for the first quarter 2022 might be a good signal that underlying economic conditions are back to normal after the brief recession of March-April 2020 and the subsequent recovery that was fueled by monetary and fiscal stimulus. 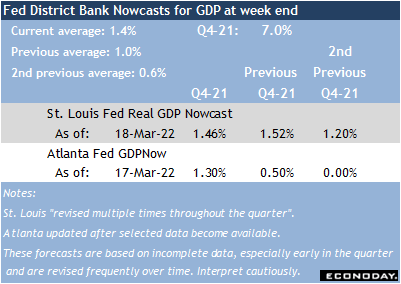